Redefining Atlantis will join two other works I have been preparing for some time. There have been numerous additions and amendments to the original text provided here.

The information here, is in parts inaccurate but the updates I do have at hand. If you require clarification on anything comment on the post and I will brief you on any updates. 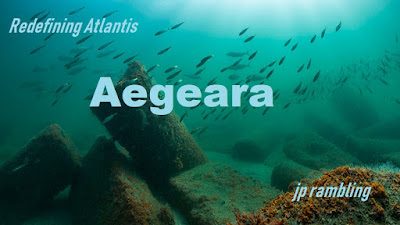 In addition there is new material featured including a revised account of the Timaeus & Critias Dialogues, ancient Greek myth and legends retold giving them more plausibility and a tale of everyday life through the eyes of Erich, Prince of Troy (aka Ganymede)

The site aegeara.co.uk is under currently under construction 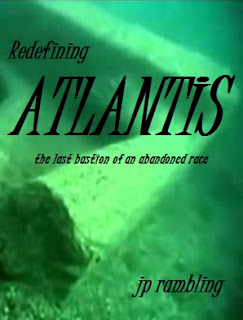 'Redefining Atlantis' is perhaps a little misleading, it goes much deeper*. The focus is not only the enigmatic lost city / island / continent, but also on Greek Mythology, ancient Greek culture, anthropology, and the migratory patterns of the Bronze Age eastern Mediterranean peoples.

Originally intended as a book, Redefining Atlantis just became too big. This blog builds into a comprehensive guide that explodes myths, provides answers, and gives informed personal hypotheses. Much of what you read here is well documented, the perception however is personal and to the best of my knowledge unique. Though not considered an expert in any field, an eclectic wisdom has certain advantages over a specialised one. My chief criticism of others who may have researched Atlantis is tunnel-vision, preconception, and inflexibility of thought.

The story of Atlantis is bigger than the biblical Sodom and Gomorrah type tale. The Atlanteans were key to history, the missing link. The Atlanteans were the progenitors of the Hellenes, and their polytheism is the origin of monotheist religion. There is little doubt they were the superior race of their time. Although there could be a basis for some otherworldly explanation, there is also a more natural one, in Redefining Atlantis we will consider all the options. Split into four sections, an overall picture is given for you to assess and draw your own conclusions.

Before the Romans adopted and tainted it (see Greek Love), Greek 'religion' was in many ways something to be lauded. Over the years, misinterpretation has led to many misconceptions. Redefining Atlantis aims to set the record straight. If you have anything to add or require additional information, please comment on the relevant post or e-mail admin@totallyjp.com in confidence.

This blog-book is neither intended to offend nor influence the beliefs of the reader. This is MY belief. In these sensitive times, it appears just holding an alternate view of our origins can cause hysteria. The information here is provided as a statement of 'facts' as I see them and in my opinion is no less plausible than the views of anyone else.
Posted by jp at 01:00 6 comments:

Email ThisBlogThis!Share to TwitterShare to FacebookShare to Pinterest
Labels: Introduction

Part I - The Evidence

This section gives an overview on what we already know for sure and / or what can reasonably be assumed to be true. 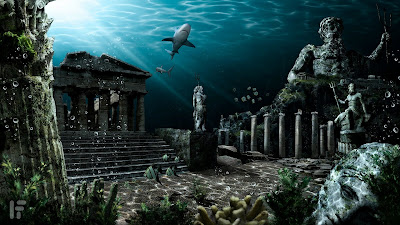 Email ThisBlogThis!Share to TwitterShare to FacebookShare to Pinterest
Labels: header

Personal research began as a child. It was purely a need for answers, answers that nobody seemed to know yet were willing to kill each other over. The research was never meant to be so diverse, but when studying one thing numerous side issues came to light and were in need of investigation. The initial goal was rather simplistic; discover the origins of human existence, how hard could it be? Redefining Atlantis is a spin-off from the main body of research but no less significant.

The problem is verifiable fact. What is fact? Archaeological evidence is perhaps most reliable, although one cataclysm can wipe out significant evidence from a previous one, and I have reservations about the accuracy of dating systems due to atmospheric fluctuation and variations in terrain. Art-work and sculpture are not only open to interpretation, but can also be misleading, especially when drawing comparisons with society today as was the tendency of many historians. Even text is dubious, just because somebody wrote it doesn't make it true, changes in language leave context open to conjecture. With such a view, problems were soon encountered. As much information as possible was gathered and analysed for clues, or tenuous links that could possibly substantiate another claim.

The clues are there, and in abundance. Nevertheless, all this information still doesn't make it fact. Even when corroborated by another, it is most likely they all came from the same sources. There will always be doubts when looking at early history, religion, archaeological evidence, myth, and legend. At some point a decision has to be made on which information can or cannot be trusted. No matter what the source cited here there will always be critics, such is the nature of the beast. The information provided is from the most reliable sources available to me and has been included only after careful consideration.

The primary source of the Atlantis story comes from Plato as told by Critias in the Timaeus and Critias Dialogues. Most other sources are later and almost exclusively based on Plato's account. Some argue the tale of Atlantis is just a fictional moralistic metaphor, and there is some evidence to justify this. There is no direct mention by Homer of Atlantis, although there are suggestions an Atlantean society had been existence. Other ambiguous references from the Middle East, India, and Egypt, could easily relate to Atlantis but Plato is the only one to mention it by name. Homer does however give us invaluable information about the life, times, and culture in ancient Greece and among Mediterranean peoples. 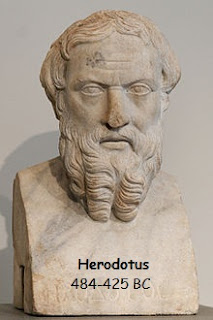 Herodotus is another prime source due to his Homeric references. If Plato is considered a little suspect in some ways, Herodotus gives even more reason for scepticism.  Herodotus was called the 'father of history' by many, a phrase supposedly coined by Cicero. Yet despite numerous accolades, Herodotus, like Plato, had critics who ridiculed his work. Some of his contemporaries called him the father of lies. There is little doubt he travelled extensively, verified by geographical and historical facts he described in detail, and much information was gathered from folklore or wandering minstrels. Herodotus stated he only reported what was told to him (echoes of Plato in some respects), and there were some fanciful stories by consequence. Thucydides was a critic of Herodotus, not without cause.

Thucydides was known as the 'father of scientific history' and whilst his need for accuracy is commendable, to completely overlook myth and legend is folly. It is a problem shared by scientists and atheists alike. They dismiss a whole book due to sporadic nonsense. Many of the collected folk tales were undoubtedly embellished but rather than discard them, we should look for the clues they hold. Another thing about Herodotus is his being a contemporary of Socrates, and he too seemed loathe to attribute acts to the Gods. However his 'reporting' style saved him sharing the same fate and may have been an inspiration for Plato.

Homer is an enigma. When the fact there is uncertainty as to whether Homer even existed is thrown into the mix, any remaining readers of a sceptical disposition will roll their eyes. Very little can be verified. It is one view that Homeric Poetry was akin to folklore and not directly attributable to one person, named Homer or otherwise. Travelling minstrels and entertainers would entertain with such tales. No doubt they were subject to the Chinese Whispers treatment. Even Plato's account of Atlantis was heard 4th or 5th-hand at best.

Hesiod (c.750-650 BC) is thought to be a contemporary of Homer and his Theogeny is the major source of the genealogy of the Gods. There was a lot more to Hesiod besides his Homeric dialect poetry. He was cited as a major source of farming techniques, economic thought and astronomy. Hesiod's genealogy is one source I use for my own hypothesised genealogy but there are significant differences.

Here, Greek Myths are treated in much the same way as other ancient scriptures, possibilities are explored objectively. The pleasing thing with the ancient Greeks is how they 'humanised' many of their deities. There are clues to actual people and places that can loosely be accounted for by 'known' historical / geological events. Conversely there is also a lot of nonsense (or superstitious misinterpretation of natural phenomena and the cause).

Of course it would be folly to believe or try to rationalise without at least a little evidence. Socrates tried to dispel the nonsensical areas of mythology but was executed (encouraged to commit suicide) for impiety and corrupting youth. Unfortunately all the work of Socrates is non-extant and Plato's accounts of it may be coloured by paranoia. The Greek Myths themselves are taken from a variety of sources, the majority having their documented origins with Herodotus, Homer, and Plato. Most are pretty similar both in translation and the way they are generally perceived.

For the most part I haven't attributed sources but translations are from those generally accepted as most accurate. Being linguistically challenged with regard to Linear B and ancient Greek, I have to accept these'true translations' but I often feel context has been misconstrued.

Some translations are of text that is no longer extant and leaves the door open for more inaccuracy. Whilst extracts of generally accepted translations will be posted here, they are subject to closer scrutiny and are often given a slightly different slant. For the most part, I regard contributions from Roman sources as deeply suspicious. I feel the Romans on conquering Greece adopted the culture of those who were in essence their ancestors, but besmirched it with their excesses.

Geological and archaeological evidence is invaluable yet even here I feel many are missing the obvious or simply failing to correlate data correctly. Text is open to (mis)interpretation just as is art. To fully appreciate and understand the context of scripture or imagery, a more holistic view is necessary.
Posted by jp at 09:01 No comments:

Redefining Atlantis is the culmination of 4 decades of research. For almost all that time I have never wavered in my belief that Atlantis was a fated city on the southern tip of a large Aegean landmass. In recent years others have begun to accept the significance of Santorini in the story of this legendary city, but they still haven't quite grasped what happened and when.
Redefining Atlantis provides you with all the answers to age old questions. The blog is free and interactive in that questions are encouraged and will be answered in the comments section of the relevant posts. For more info e-mail info@totallyjp.co.uk (launch date 30-6-19)

This blog book is divided into four sections for convenience. Part I lists some of the 'evidence' that supports the idea that this isn't a complete waste of time and energy. Part II looks at some of the characters and events from popular myths and Part III looks at how the first two sections come together based on culture and archaeological evidence.
Part IV was never intended to be part of 'Redefining Atlantis'. I wanted this to be as near factual as is possible, so I largely put aside personal hypotheses and looked at things objectively. However the information built up and stored over the years gave me an instinctual feeling that I know roughly how and why things happened. I began to write a fictional tale of this and this will be serialised in Part IV.